We had a 3 hour drive to Bayers crop station north of BA. A 40 ha site where they trail chemicals on a special licence from the government on cotton, maize, canola, wheat and soya bean. We met with Matias Pastore who introduced us to the station and his father who owns a farm and agronomy business supplying seed and inputs. We had an interesting introduction to farming in Argentina, land values, rental incomes, gross margin and rotation. Since 1996 when Gm roundup ready came into commercial use the rotation has gone to continuous soya bean. Rents have gone to 600 us dollars per ha. Income after all costs and taxes 35 us dollars per ha. Haulage and storage is based on 15% of published soya bean price. The government taxes the farmer 35% on world soya bean price. They own the processing plants to produce oil so it’s a clever tax. Doesn’t help the marginal land that produces low yield. It’s big business here but the grass isn’t greener. The round up ready crops are seeing a broadleaved weed becoming tolerant to roundup, different salts are proving effect in the roundup. Interesting broadleaved weed is seen in no till operations but not plough based. It’s was an enjoyable day which we also spent with Phil a local farmer from Ireland who farms near Kevin and flew over that morning. I saw this sign in BA, but didn’t want to hang around in this area incase I had a broke back mountain experience. 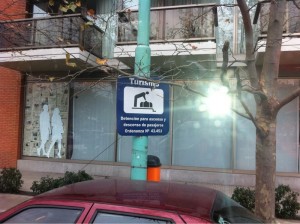