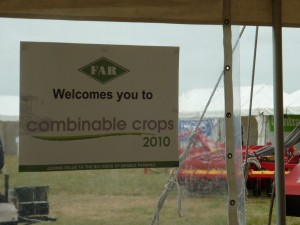 James Powrie and Dan Bloomer from Landwise, Hastings in the North Island, Paul and i went to the FAR combinable crop day. Stuart Wright Chairman of Nuffield New Zealand was also the chairman of Far. Craig Mackenzie a Nuffield Scholar had set himself up in a business selling Green Seeker and Weed Seeker technology minimising inputs and maximising output. Another Nuffield Scholar Hugh Ritchie who has embrassed Precision Ag and only farms at night. After looking at trails presentations and machinery manufacture stands we had a talk given by Mark Inglis the mountaineer with no legs. After his speech on how he climbed Everest with no legs and lost fingers through frost bite i felt like a pathetic man for complaining it was cold at 10C when he had been climbing at minus 50C. Its all about attitude was the clear message, keep pushing forward and take good instruction.
Earlier in the day James and Dan took us to one of the farmers of the year runners up John Evans who had a diverse business. He showed me a side shift frame he had built which can be used in a controlled traffic situation. He also was mastering the use of wireless technology to his sprayer for spray recommendation. His wife had a rouging business and had imported a machine that three people could sit on and be motorised up and down the field. I would like to thank John and his wife for showing me around, and Stuart for the Far Day and special annoucement at the dinner.