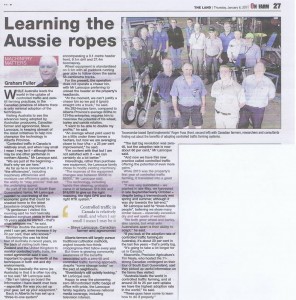 On my return yesterday from India, Julian Burman who had been working in Australia at another scholars farm bought back an article in the farming press of my time with the Canadian group looking at controlled traffic farming in Australia. I’ll put the article on the PX website under the news section if anyone wants to read it.
I’ve had a message from Kevin that they are going great guns in India and are planning to go to the Taj Mahal, lucky devils.
On another note we have had some theft with 4 batteries being stolen which run our electric netting, im sure a caravan somewhere has power again. I won’t report to the police as its not a speeding fine so they wont be interested and id rather poke myself in the eye than waste my time on hold.

One thought on “Famous in Australia”