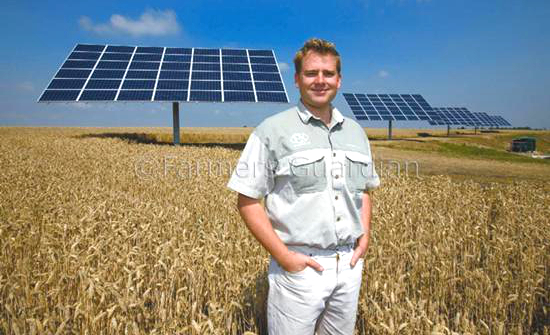 The Farmer’s Guardian have also reported on our new solar panels. They’re proving to be a hit in all parts of the media! The article is reproduced below:

The UK’s first ground-mounted ‘tracking’ photovoltaic (solar) panels have been installed on a farm in Cambridgeshire to provide electricity for a grain store and drying facility.

Each of the five units moves to follow the sun, making them 35 per cent more effective than roof mounted panels. James Peck, managing director of PX Farms, Dry Drayton, had been looking into various renewable energy options when he saw this type of solar panel in Pennsylvania, while on his Nuffield Scholarship.

“Solar suits my arable business as I use most energy for grain storage and drying during the summer months when there is the most sun, unlike many businesses which use more electricity during the winter. That is not to say they don’t generate electricity all year round as they do not rely on direct sunlight, so also produce a significant amount of power during the winter. I also think solar is more reliable than wind,” he says.

PX Farms built a new grain store in 2008 with a 26,500-tonne capacity and planning permission has been granted for another store. Mr Peck had been considering installing solar panels on the roofs of these buildings, but now believes the free-standing tracker panels are a better option. 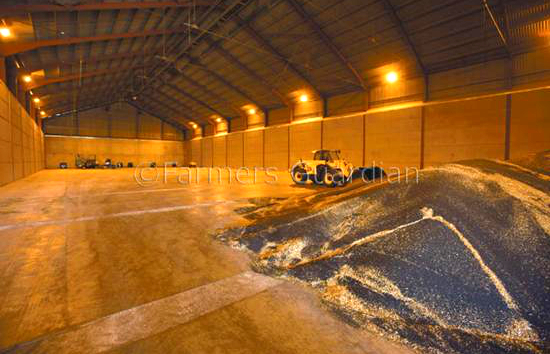 “They have cost 15 per cent more than roof panels, but that cost would have been absorbed by the cost of reinforcing the roof to withstand the panels. So the fact they produce 35 per cent more energy meant it was a simple choice. Plus by installing panels on a roof there is the danger it creates some water leakage and with £4 million of grain in the shed it was a risk we were not prepared to take, as we could not establish who would be liable for any damage to grain.

“The solar panels have been erected on what was a ‘dead space’ behind the grain store, which will be grassed down and they are high enough for it to be grazed by sheep, or possibly my father’s alpacas.

“It also allows easy access for any engineering and maintenance work and it doesn’t have all the health and safety issues which we would have if they were on a roof.”

The units have their own protection systems in that if it is very windy they go into flat mode, like a table top, and if it snows they move to a vertical position.

They were sourced in Germany and the solar panels made by BP. Mr Peck says: “They were very easy to install and the great thing about them is that all the components can be bought ‘off the shelf’, so if the company who installed them disappeared we could still get any parts we needed.”

The 210 panels on the five units have cost £194,000, which has been 100 per cent funded by a NatWest bank loan and will be repaid over 10 years – seven years for the capital and three years for the interest.

The current annual cost of electricity for the grain store is £26,000 plus a kerosene cost of £32,000. It is anticipated energy generated by the solar panels will result in a 40 per cent annual cost saving. When the loan has been paid off, after the 10th year, the solar panels have the potential to generate£25,000 of income per annum.

The units have the ability to generate 49.3kW, therefore, through FiT’s (Feed-in Tariffs) Mr Peck will be paid 33p/kW for all the electricity produced and this price is set for 25 years. He will also make a saving of 10p/kW on electricity he uses himself and will then be able to export any surplus electricity back to the National Grid for 3p/kW. The economics of the project will get better as the price of energy increases.

Mr Peck says there were no problems getting connected to the National Grid as the power cables had all been ‘up-rated’ when the grain store was built, so all that was needed was to change the meter.

Planning permission for the tracker units was granted as part of building the new store as one of the conditions of the county council was it had to use a minimum of 10 per cent renewable energy. 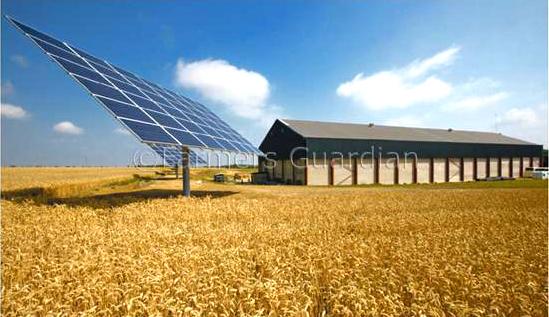 Mr Peck says he had no objections from the local community and since the installation has had no local reaction to them at all. The most nervous of those involved with the project has been the insurance company, says Mr Peck. In response to this a fibre optic cable is to be installed around the farm and the tracker units will be filmed at all times to deter any theft of panels or cable. Trees will also be planted to act a screen.

Although the tracker units will bring financial benefits to the business Mr Peck stresses they have also been installed for ‘social’ reasons.

“Energy and water are going to be even bigger issues in the future and we need to manage what we use much better. We already use air source heat pumps to air condition our offices in summer and heat them in winter.

“The next stage is to set up a water system which will collect water from the roofs and it will then be used for jobs such as washing down concrete, washing lorries and filling sprayers, so installing the solar panels is just part of a much bigger plan,” he says.

The original article can be viewed here.