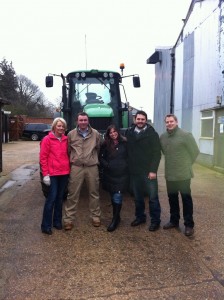 Irish, Americans and English Nuffields get together for LAMMA Show. Wednesday was a good day at Lamma show, I meet Michael Horsch who was the highlight of the show with good decision on Controlled traffic farming. The show expands every year and will soon take over from cereals. Shame about the temperature, Only farmers would have an out door show in January at 3 C. On returning home i was pleased to see Kevin and Una Nolan, Nick and Jessica from USA who came to stay whilst flying in for Lamma and back to Dublin. Kevin had some treats for them both with a focus on drinking, good old irish socialising.