Just when you thought it was safe to venture back into the media, there’s more coverage of the new solar panels here at the farm.

A Cambridgeshire farm has become one of the first in the country to install a system of solar panels that “track” the path of the sun, generating electricity for the farm’s commercial grain drying enterprise.

The five ground-mounted Deger 9000 NT dual-tracking photovoltaic units at James Peck’s 2023ha (5,000-acre) Scotland Farm, Dry Drayton, have a total power output of just below 50kWp (10kW each) and could cut the annual electricity bill by up to 40%.

Mr Peck, a former Farmers Weekly Young Farmer of the Year, says that because the panels are able to move and track the path of the sun throughout the day, in a similar way to sunflowers, they are up to 35% more efficient than fixed, or roof-mounted solar units. 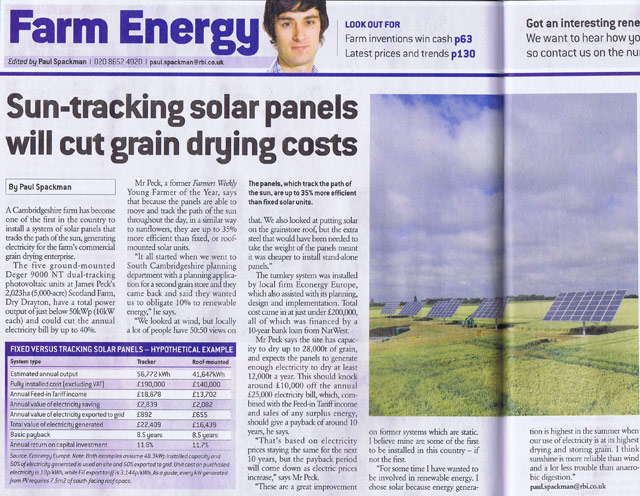 “It all started when we went to South Cambridgeshire planning department with a planning application for a second grain store and they came back and said they wanted us to obligate 10% to renewable energy,” he says.

“We looked at wind, but locally a lot of people have 50:50 views on that. We also looked at putting solar on the grainstore roof, but the extra steel that would have been needed to take the weight of the panels meant it was cheaper to install stand-alone panels.”

The turnkey system was installed by local firm Econergy Europe, which also assisted with its planning, design and implementation. Total cost came in at just under £200,000, all of which was financed by a 10-year bank loan from NatWest.

Mr Peck says the site has capacity to dry up to 28,000t of grain, and expects the panels to generate enough electricity to dry at least 12,000t a year. This should knock around £10,000 off the annual £25,000 electric bill, which combined with the Feed-in Tariff income and sales of any surplus energy, should give a payback of around 10 years, he says.

“That’s based on electricity prices staying the same for the next 10 years, but the payback period will come down as electric prices increase,” says Mr Peck.

“These are a great improvement on former systems which are static. I believe mine are some of the first to be installed in this country – if not the first.

“For some time I have wanted to be involved in renewable energy. I chose solar because energy generation is highest in the summer when our use of electricity is at its highest drying and storing grain. I think sunshine is more reliable than wind and a lot less trouble than anaerobic digester.”

The original article can be seen here.