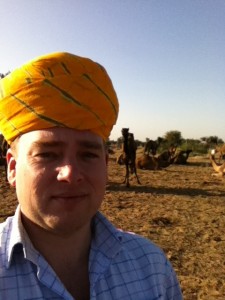 On arriving at the field where camels where grazing we where given turbans to wear. This was an honour to be presented and fitted by a warrior.
The camels where in a large group. The arrangement for the travelling camel farmers was they where allowed to graze the fields before cultivation so that manure was spread over the land. The camel farmers made us camel tea which I tried to avoid. I managed to down the tea, but little did I know Tony was enquiring about the camels milk so before I had time to wonder off to inspect a neighbouring wheat field my cup was filled with milk. I must report, it wasn’t bad. There was another pot on the boil with lumpy milk and if that was next to be served they wouldn’t have caught me on a camel.

One thought on “Never thought I’d see the day.”