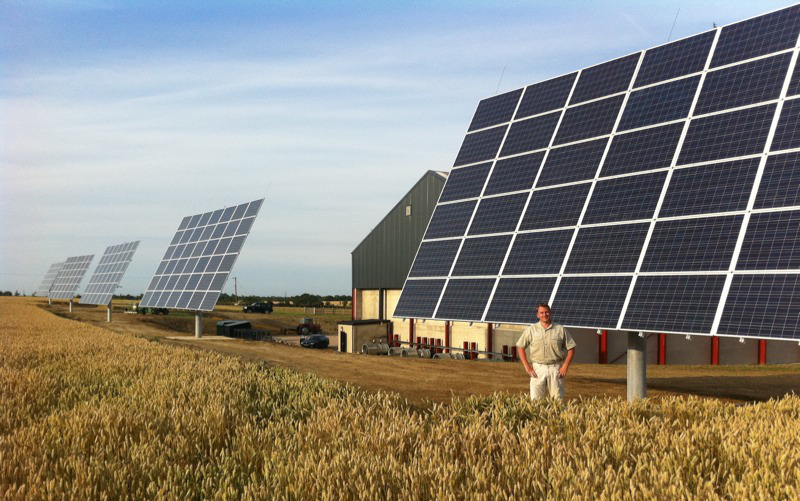 A new generation of photovoltaic panels which turn to follow the sun to produce solar energy, have been installed at a Scotland Farm.
They will be providing the power to dry thousands of tonnes of grain. The five ground-mounted ‘tracking’ photovoltaic units are now operating and the renewable energy will save around 40 percent of the farm’s annual electricity bill, and help the environment.
“I am very excited by this project” said James. “For some time I have wanted to be involved in renewable energy. I chose solar because energy generation is highest in the summer when our use of electricity is at its highest drying and storing grain. I think sunshine is more reliable than wind and a lot less trouble than anaerobic digester.
“These units are especially effective because, like sunflowers, they keeping turning towards the sun as it moves across the sky from dawn to dusk. These are a great improvement on former systems which are static. I believe mine are some of the first to be installed in this country – if not the first.”
The five tracking units are sited at ground level close to the grain store to which the power they produce will be sent.
The system was installed by local firm Econergy (Europe) Ltd. Robin Purser of Econergy remarked “We were thrilled to be asked to help James with his project. With a power output of just below 50kWp the system works well with Feed-in Tariffs, the government’s renewable energy support programme.
“Ground mounted systems are becoming more popular as people realise the benefits; photovoltaic is not just for putting on a roof.”
James was assisted in the detail by farming advisor and Norfolk CLA committee member Lindsay Hargreaves. “The really great thing about this installation is that commercially, it stacks up,” he said. “We needed this to pay its way within 10 years on 100 percent borrowed money, which it does. So this is not just a ‘win’ for the environment, but for James’ bank balance too.”
Having won a Nuffield Farming Scholarship which has taken him all over the world for 20 weeks to gather data for his paper ‘Arable farming, where next and how do we get there’, James has seen the way in which many countries are harnessing the sun and employing a whole range of renewable energy sources.
Source: Country Land & Business Association