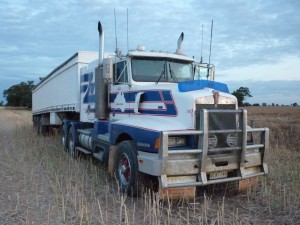 I spent the day with David Cooks a entrepreneur near shepparton, where he was doing controlled traffic farming on a 9 metre system and 3.1 metre wheel track. He had successfully joined forces with a neighbour to increase there acreage and to be able to adopt new technologies. They had imported a cross slot seeder from New Zealand and was becoming one of two importers for cross slot in Australia. He took me to a paddock to show me the drills capabilities of drilling into a mass of grass without blocking. A local contractor was also employed to swath the Beans and Canola which i had a ride around with and learned how he had built his own sprayer to follow the swather and using John Deere technology not launched in the UK yet was controlling the sprayer outfit. I also learnt about sealed silos and controlling insects in temperatures 10C +.
The beast of a lorry was on Alastair Starritt’s farm which i drove carting oil seed rape from the paddock to the silos. I’m sure the boys back home would like one of these. Alastair was Combining through the night so i finally got more than 5 hours sleep. As i sat here typing this blog a random sheep was trotting around the garden which has been hiding in the undergrowth was doing its best to avoid capture from Malcolm Starritt. I thank Alastair and Beau for letting me stay and showing me around there enterprise.