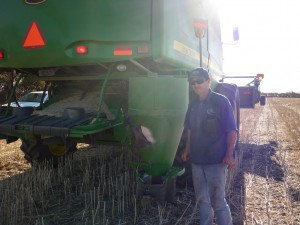 Mark Wandel was mastering controlled traffic farming using John Deere Starfire. Working on a 9 metre system he was using an 18 metre seeder, 36 metre John Deere sprayer and had the first 36 metre weed seeker sprayer in WA which was some piece of kit. Used pre drilling it turns each nozzle on when it passes over a weed, saving vast amounts of chemical. Mark was using as seen in the picture a cyclone for the chaff, directly behind the wheel track. He was swathing barley when i arrived which i’ve never seen before. The swather honey bee header could deliver a swath in three places which helped with control traffic farming especially on headlands. Canola on the controlled traffic fields where doing 2.2 tonnes/ha but the headlands where doing 1.7 tonnes/ha, which shows the next step is headland controlled traffic. I would regard mark as a leader in controlled traffic farming.