Went to a direct drilling and controlled traffic farming visit on a farm in east Germany with michael Horsch. There where two of Michael’s drills there for direct drilling, one called the sprinter NT which is know in production. Fertiliser was applied by disc and a single tine followed to place the seed. I was impressed by this design as it wasn’t prone to straw raking or blockages. We looked at barley, osr, first wheats and second wheats drilled with this system over 1000’s of acres. The first wheat and barley looked superb but the cold wet weather has affected the osr. The where many farmers taking an interest to see if it was a route they would pursue. Fertiliser is key in this approach.
On this farm the buildings roofs where covered in solar panels on a large scale. Germany seems ahead in leaps and bounds on electric production. We went next to one of Michael’s factories to see the pronto drill in manufacture and to his trails site where he trails all manner of drilling techniques and cultivations. 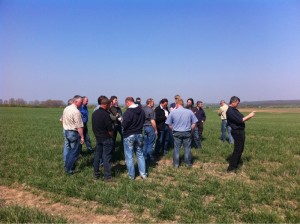 One thought on “Farm visit on direct drilling in East Germany.”