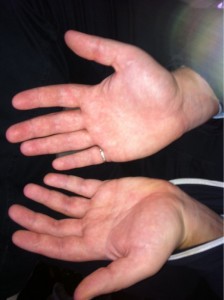 Tony booked us in for two nights in a farm stay in deep roots a 30 acre wheat, rice and mangoes. He accidentally found the stay by researching mutton and it was on the menu.
Kanwal kindly looked after us well and organised us trips to two dairy farms, one being a dairy and processor on one site, which will be farming by 2012 20,000 milking cows plus replacements and a 2 mw bio digester. The chicken farm opposite the retreat was a three storey building which was unusual.
Labour is king over mechanisation, labour cost is £ 3 a day. Land values £60,000 an acre. Four Maize crops can be grown per year. 6 months wheat, 6 months rice in the same year is standard in this area. A scary fact is water in 1947 was 10 ft down, in 1962 was 40 ft and 2010 was 500 ft down. 44% of india’s rice is grown in the Punjab region on 2% of india’s agricultural land.
Kanwal father looked at our hands,my left hand showed I was going to have a happy and long marriage which is handy as I marry in June. I wonder what I would have done if it was in reverse. My right hand he called a golden hand which he hadn’t seen before. Deep line from the bottom to the top which shows success and wealth and a happy destiny. Hail the golden boy.