Dave Gooden Nuffield scholar 2010, with his two brothers and father just fixing the combine as it had r 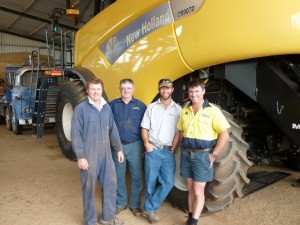 ained between 10mm and 25mm depending which part of the farm. The Goodens are practising a controlled traffic farming on a 13.6 metre system, no till system, growing wheat barley and canola. Depending on the season due to droughts they will bale the land for hay which will enable them to cover costs in a drought year. Dave took me to a neighbours property who had built his own mobile water mixing station. Spraying at 30 lts/ha he was doing 500 ha a load. Only two tank fulls a day. We visited Delta Ag which was a supply business to farmers for variable products. Warwick one of the agronomists showed me the seed and fertiliser area and the chemical shed. It was interesting to see the same chemical like Atlantis but half the price!
Combining had come to a stop due to the rain so a good old knees up in Lockhart at the commercial hotel with a number of local farmers and there families including 4 nuffield scholars together. Julian who helped us at harvest was working on one nuffield scholars farm Brent Alexander thanks to Jim Geltch was supporting a rather porn star moustache for Mowember. I have photo evidence for his father back home on the hunting field. Dave and Heidi looked after me with the help of Isac (jr). I’m extremely grateful for there kindness and that it rained so dave and i could have a look around. Dave was naughty he got up early to wash my hire car and fill it with fuel he was concerned it looked like a 4WD, and there might be a clause to suggest that it wasn’t allowed down farmers tracks and through grass hopper swarms which where currently sticking out of the radiator.