Land of dreams and honey. 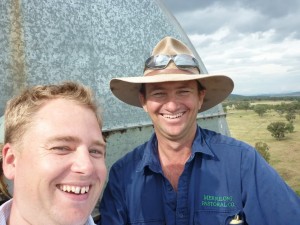 Dave Brownhill Nuffield 2010 Australian Chairman and legend. Dave and liz kindly let me stay in the ‘Hut’ which was a five star house in the garden with fresh flowers. It rained after i arrived and I’m beginning to get a complex as it seems to be following me around Australia. The picture was taken 36 metres high at the top of the elevator, not liking heights i still had to get to the top as i was too proud for Dave to tell the world that the pomey was beaten especially when we are doing so well at the cricket.
The soil on the Liverpool plains is fertile with underground water, perfect! Cotton in CTF was the new enterprise, the agronomist quoted it was the best he had looked at. Tramlines had some depth which showed the benefits from CTF but also asked some interesting questions. Weedseeker technology on the sprayer and biomass scanners (greenseaker)was saving 1000’s a year on chemical costs. Specially converted belly tanks allowed the second line to turn on and off when the scanner detected weeds as the sprayer pasted over the field, Brillant!. Next morning we had 63 mm and the Nissan Micra not known for its 4wd qualities was dispatched or i might have got stranded. On route following Dave to a local town to meet Richard Heath he slowed down on a gravel track to show me 20,000 acres of flooded crops and the Micra was aquaplaning at a pace to towards the rear of his hilux, luckly he saw me in his rear mirror and put his foot down which saved my insurance excess. Over a coffee the three of us thrashed out the future of agriculture in 20 years time. I enjoyed my time with the brownhills and wish i’d had more time to spend with them.