This week Farmer’s Weekly reported on the increase in profitability from the installation of our automatic grain dryer. The article is reproduced below: 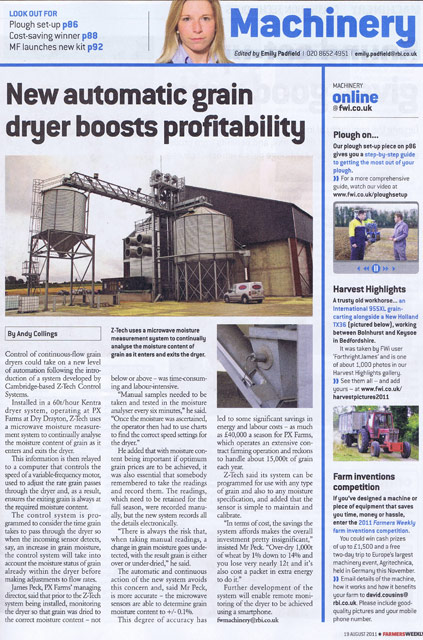 Control of continuous-flow grain dryers could take on a new level of automation following the introduction of a system developed by Cambridge-based Z-Tech Control Systems.

Installed in a 60t/hour Kentra dryer system, operating at PX Farms at Dry Drayton, ZTechuses a microwave moisture measurement system to continually analyse the moisture content of grain as it enters and exits the dryer.

This information is then relayed to a computer that controls the speed of a variable-frequency motor, used to adjust the rate grain passes through the dryer and, as a result, ensures the exiting grain is always at the required moisture content.

The control system is programmed to consider the time grain takes to pass through the dryer so when the incoming sensor detects, say, an increase in grain moisture, the control system will take into account the moisture status of grain already within the dryer before making adjustments to flow rates.

James Peck, PX Farms’ managing director, said that prior to the Z-Tech system being installed, monitoring the dryer so that grain was dried to the correct moisture content – not below or above – was time-consuming and labour-intensive.

“Manual samples needed to be taken and tested in the moisture analyser every six minutes,” he said. “Once the moisture was ascertained, the operator then had to use charts to find the correct speed settings for the dryer.”

He added that with moisture content being important if optimum grain prices are to be achieved, it was also essential that somebody remembered to take the readings and record them. The readings, which need to be retained for the full season, were recorded manually, but the new system records all the details electronically.

“There is always the risk that, when taking manual readings, a change in grain moisture goes undetected, with the result grain is either over or under-dried,” he said.

The automatic and continuous action of the new system avoids this concern and, said Mr Peck, is more accurate – the microwave sensors are able to determine grain moisture content to +/- 0.1%.

This degree of accuracy has led to some significant savings in energy and labour costs – as much as £40,000 a season for PX Farms, which operates an extensive contract farming operation and reckons to handle about 15,000t of grain each year.

Z-Tech said its system can be programmed for use with any type of grain and also to any moisture specification, and added that the sensor is simple to maintain and calibrate.

“In terms of cost, the savings the system affords makes the overall investment pretty insignificant,” insisted Mr Peck. “Over-dry 1,000tof wheat by 1% down to 14% and you lose very nearly 12t and it’s also cost a packet in extra energy to do it.”

Further development of the system will enable remote monitoring of the dryer to be achieved using a smartphone.

The original article can be viewed here.